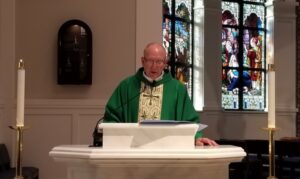 In a little autobiographical piece entitled, Surprised by Joy, C.S. Lewis tells the story of his conversion. I think his journey has some things to teach us. For years he was blocked from committing himself to faith precisely because of his keen, uncompromising intellect. Brilliant, searching, skeptical of easy answers, he was unable to picture to himself how the great events of Christ’s life and resurrection could have happened. Moreover, he saw commitment to faith as somehow selling short one’s freedom. In all of this, he was constantly challenged by J.R.R. Tolkien, the author of Lord of the Rings, a friend and a practicing Roman Catholic. Lewis recalls how, on many an evening, Tolkien and he would have dinner together and then walk the streets of Oxford for hours, arguing faith and religion. On one such evening, shortly before Lewis’ conversion, Tolkien challenged him by saying: “Your inability to picture for yourself the mysteries of Jesus’ life is a failure of imagination on your part!” Lewis relays that he was stung by that remark, but also realized its truth.

Not long afterwards he converted to Christianity– and, as Surprised by Joy puts it, on the night when he finally, first, knelt down to acknowledge his faith– he did so, not in a burst of joy and enthusiasm, but “as the most reluctant convert in the history of Christendom.” Parts of him were still in rebellion, but he knew he needed to kneel in a certain acquiescence because, as he put it, he had come to know that “the harshness of God is kinder than the softness of man and God’s compulsion is our liberation.” Happiness and freedom, he realized, are paradoxical in the extreme. You can only have them by giving them away. Giving away freedom is what makes us free, just as jealously hoarding it is the ultimate enslavement.

The first reading we heard today (from the Book of Wisdom) asks the question of how we can possibly come to know the eternal divine truths? What Jesus reveals in the gospel reading about the relationship of love and freedom is one of these truths. He reveals that the essence of love is a kind of obedience, a free acquiescence, a giving over of one’s freedom, a laying down of one’s life for love, or morality, or duty. Freedom doesn’t achieve its purpose by claiming itself for itself, but by giving itself away.
There is a great paradox in that, and we see it stunningly portrayed in the gospel scene where Jesus stands before Pilate during his trial. From every outward appearance, Jesus is unfree. He stands before Pilate and the crowd, shackled, helpless to walk away, seemingly a victim. Yet, in all of literature, one will never find an image of someone more free than Jesus at that moment. When Pilate says to him: “Don’t you know that I have the power to set you free or put you to death,” Jesus answers, “You have no power over me. Nobody takes my life. I lay it down of my own free will.” Pilate understood exactly what that meant: you can’t make a saint into a victim, or a martyr into a scapegoat. You can’t take by force what someone has already freely given
.
Scholastic philosophy made a distinction around the notion of freedom that partly captures this. It spoke of freedom as “freedom-from” and “freedom-for.” The former designates a certain adolescent ideal, where freedom means lack of restraints, lack of duty, lack of moral inhibition, the capacity to do whatever you like. The latter designates the purpose of freedom itself, namely, the capacity for self-donation in love– for altruism, for morality, for duty, for service. This is not something we understand or accept easily. We are all too easily seduced by the idea that freedom means “freedom-from”—from duty, from moral restraint, and from anything else that inhibits or ties us down. Duty, morality, and religion are then seen as unhealthy weights, shackles to be shed. But that’s a dangerous, and ultimately unhappy, notion.

Simone Weil, a fiercely independent mind who died fighting for freedom, was once asked: “What are you searching for?” Her answer, in essence: “I’m searching for someone to be obedient to because without obedience we inflate and grow silly, even to ourselves.”
It was precisely this realization that drove a reluctant C.S. Lewis to his knees in prayer. Again, as he expressed it, God’s harshness is softer than our kindness and obedience in love is what sets us free.

A reporter was interviewing the winner of a triathlon in which contestants do a 1.5-kilometer swim, a 40K bike race, and then run a full 10K to the finish line. The winner was bent over, hands on his knees, panting, just moments after his thrilling finish when the reporter asked, “What does it take to win a triathlon?” He looked up, sweat pouring from his face, and said, “Everything.” Jesus was making the same point about finding our way to him. Half measures won’t work when it comes to entering into the kingdom of God. It will take everything we have—and then some. Thankfully, once we have given all we’ve got, God is more than happy to supply the “then some.”
In the gospel reading, Jesus is offering examples of how we can have “freedom-for” him. He starkly states that both personal relationships and possessions cannot be more important than our relationship with God. Most of us here would probably easily agree that our love of God should rank above our love of pizza or our new I-phone or even our retirement savings! But then Jesus deliberately picks the most precious of relationships, the highest of human loves, and suggests that even these family loves should pale in comparison to the love one has for God. He is asking us to search our hearts, and to examine our lives and how we use our time, to evaluate if we really love God most of all, more than all other human loves.

And that is the question that remains for us: do we?