Our Lord Jesus Christ, King of the Unvierse 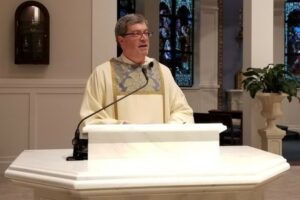 On the last Sunday of the Church’s liturgical calendar, we celebrate the Solemnity of Our Lord Jesus Christ, King of the Universe. Next week, we begin our observance of Advent, and in about a month, we celebrate the Christmas season. Before we get there, what does the Church want us to take from today’s special celebration?

The first thing that stands out to me is the title King of the Universe. According to Wikipedia, the estimated size of the universe is 936 billion light years. That’s a pretty large kingdom. Of all the many titles we have for Jesus, Lamb of God, Good Shepard, this title is pretty grand. If we believe in Jesus as the Christ, we are members of this kingdom. So what does that mean?

We can get a little bit of a clue from looking back at the beginning of this solemnity. In 1925, Pope Pius XI established it in the face of a rising tide of nationalism and secularism. He wanted to remind the Christians of his day that there was more to our existence as human beings then what we see in front of us, and he feared the extremes of these two “isms”. He was proven right a decade later as war broke out in Asia, was soon to break out in Europe, and would eventually become World War II.

There is, of course, nothing wrong with a healthy sense of pride and patriotism in our country. That is especially true in the United States where we are citizens of America but can also trace our ancestry to somewhere else. All of the flags we have hanging in the narthex are there as an expression of that dual pride. As Pius XI would remind us, we are also citizens of something much greater.

Even the strongest countries or the largest empires eventually pass into history. I’m reminded of the song of the 70s rock group Kansas called Dust in the Wind. One line says, “All we do crumbles to the ground though we refuse to see.” When all of this crumbles, we still have the Kingdom that never ends. In Paul’s Letter to the Colossians, we hear what kind of king rules there. This king is the image of the invisible God. He has existed from the beginning of time itself. All that we see was created through him and for him.

When this king came to earth, he came not as a conquering hero but as a child born to working class parents. He spent most of his life in obscurity. Yet, in the few years of his active ministry, he produced incredible results. He preached and taught with an authority no one had ever experienced. He cured the sick and gave sight to the blind. He even brought back to life those who had died.

Instead of taking power for himself, he allowed the powerful of this world to put him to death. Through this act of seeming failure and destruction, he reconciled all things through him by the shedding of his blood. We hear an example of this in our gospel reading. He reconciles a criminal sentenced to death to the invisible God and welcomes him to the Kingdom. Finally, he rises from the grave and becomes the first born from the dead. He becomes the head of a Church that despite its human members continues to exist after all the secular empires that flourished at its founding have long since crumbled.

In Jesus Christ, we truly have a great and wonderful king. Most subjects of an earthly king never get to see their ruler or may only see him or her passing by in a carriage or motorcade. Our king wants a personal relationship with us. He wants to reign in our minds, wills, hearts, and bodies but will never use force. That personal relationship comes through the daily process of prayer. It is so easy to become caught up in the day to day and to neglect seeking that relationship and to forget the grand cosmic dimensions of his kingdom in which we are immersed. Find some time each day. Whether it is in the car on the way to work, the first five or last five minutes of the day, or in a more formal setting like mass or adoration, Jesus will reach out to us through the Holy Spirit when we seek him in prayer. There are many recorded moments in the gospels when Jesus sought quiet time to pray to his Father. We must do the same.

Unlike the temporary earthly kingdoms of this world, the primary attribute of Jesus’ Kingdom is humility and service. During Jesus’ public ministry, he often went to the marginalized, the sick, and the sinners. He often drew the ire of the powerful and religious leaders because of this, but he knew where the need was greatest. By following his example, we too can bring the promise of and hope for redemption to others.

There are no shortages of the poor and marginalized in our times. This isn’t just limited to those who struggle to support themselves financially. There are so many opportunities to serve and there are so many in our parish community and in the Frederick area who quietly and selflessly reach out and make life better for others. I often wish that these acts of mercy would get as much attention as what we normally see in the news. Never think that you cannot make a difference. Even the smallest act of kindness can mean so much to someone in need.

Jesus sees all the good. He wanted us to be concerned with storing up our treasures in heaven. What we are actually accomplishing is not only bringing the Kingdom of God to this world, but also beginning to build it up within ourselves. Jesus was welcomed into Jerusalem by the populace waving palm branches. We can welcome him into our hearts through the splendor of our merciful deeds. Many went out to hear him speak and preach. We can read and meditate on his word and apply them to our daily lives. He cured many of their illnesses. He can help us with his grace to overcome our own sinful ways. The Eucharist we are about to receive is such a grace filled moment.

The greatest gift that Jesus gave to us was showing us the way. There is nothing that he asks us to do that he has not first done for us. There are many mansions waiting for us in his Father’s house. He waits to welcome us there when our earthly journey comes to an end. There, we will see him as he is- humble and loving and our glorified and almighty King. When he comes in glory to finally establish that kingdom which will never end, we will be there. We will not be subjects however. We will be co-heirs.