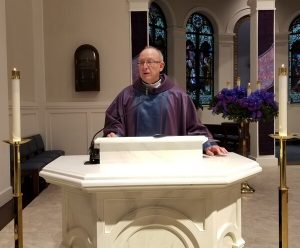 Temptation seems to be a permanent fixture in human life. We heard in the first reading of the first human beings yielding to temptation. It wouldn’t take long for each person here to relay their most recent temptation—to eat or drink too much, to gossip, or to ignore someone who needed help (among many others). Between Adam and Eve and us, we even hear of Jesus himself being tempted in the gospel reading, confirming that suspicion that temptation really is a permanent fixture in human life, affecting even Jesus.

This is the way a philosopher named Lucy explained it to Linus. She drew a picture of a heart on the fence and colored one half of it dark. “This,” she told Linus, “is the human heart. One side is all dark and the other is all light. And both sides are fighting with each other. Five cents, please!” Linus answered by clutching his heart, his hair standing on end, and saying, “Fighting with each other—I know what you mean! I think I can feel them right now!”

In the gospel reading, when Jesus has his own encounter with the Evil One, the devil is taunting Jesus about his true identity, his power, and his untested possibilities. In this meeting, the devil seems more obviously untrustworthy (than with Adam and Eve), even as he quotes scripture like a preacher. We’ve all had conversations with the devil, too, though they don’t always seem as spectacular as the ones in the Bible. Does he come to us when we are naked, or with food in hand? Of course! If it worked once, it could work again, and the misuse of sex and food are by now pretty routine temptations.

So are the ones that the devil presents to Jesus. The first one is a clever appeal to pride: “If you are who you say you are, make a miracle!” When Jesus resists that one easily, the devil tries something more complicated: “If your Father is who you say he is, then make him come down to your aid.” Jesus doesn’t bite. Finally, the devil throws a last desperate pitch: “I am a great one in my own right; worship me and gain the world!” Jesus basically tells the devil to go to hell.

On my recent trip we were able to attend “La Boheme” at the Sydney Opera House one evening. To my surprise, before the opera started, an announcement was made acknowledging that the land the Opera House sits on was a sacred gathering space for the indigenous people who once lived in that area. Both in Australia and New Zealand, there is a much more public reckoning that native peoples were often mistreated, and land was often misappropriated. The announcement at the opera that evening was an acknowledgement that the people of those countries are permanently living with that sin, because it cannot be undone now.

The people of Israel similarly knew that they were always living in sin and temptation, and so the tradition of sounding the shofar developed as a wake-up call that it was time for them to repent. Whenever you hear the shofar here at Mass during Lent (as you did earlier during the penitential rite), I invite you to allow it to be a wake-up call for you personally. It is so easy to become numb to temptation and to sin, to not even see it for what it is, or to yield to the idea that we cannot possibly change. Sometimes there are harms we inflict on others without even realizing it.

But the whole idea of Lent is to remind us that we are surrounded by temptation and to acknowledge the sin in which we live—calling it to our attention, so that we can escape its pervasive reach. We cannot do this on our own—but Paul reminds us in the second reading, that while Adam and Eve messed up the world, Jesus Christ came to deliver us from that mess.

This is from a reflection by Ryan Dueck. A minister was leading a Bible study group in a women’s prison. At one point, a young woman spoke up. She leaned forward with tears in her eyes and said: “Can I ask a question? I don’t know how to say it, but I really wanna know. How do I get unstuck? I’m so tired of making the same mistakes, going back to the same people and problems… I don’t know… I guess I just wanna know how to get unstuck?” Her words dripped with urgency, longing, dread, and pain. The minister and volunteers leading the group bumbled toward a response, acknowledging how hard it was to break out of patterns of addiction and abuse and dysfunctional relationships and poverty, but that God is present in the journey.

The minister leading the group later reflected: “I suspect that even as I grieved for the specific ways in which this young woman was stuck, I was recognizing myself and many of my peers in her words. I suspect we all get to a certain point in life where the word “stuck” can easily creep into our vocabulary. Passion for the job seems more elusive, the sizzle of a marriage wanes, faith seems more remote and inaccessible. In whatever domain of life, we settle into familiar and predictable rhythms. We realize there are things about our lives, our communities, and our world that are rather hard to change… I thought about all these things as I drove home from the jail. I thought about how it’s not just individuals that get stuck, but relationships, businesses, churches, institutions, even cultures. And I prayed. For all who feel stuck and for all the ways in which we need to get unstuck to live the lives we were created for.”

The sounding of the shofar is a call to become unstuck—to clearly see those areas of our lives that have become stuck in self-centeredness, monotony, hopelessness, or isolation. Let’s pray in a special way during this Lenten season for ourselves… our families…. our church…. and our country…. that, with the power and presence of Jesus our savior, we may get unstuck from temptations and sin in ways that will allow us to live in the fullness of God’s life and grace.