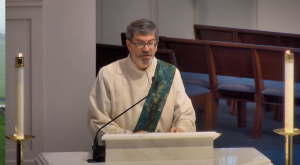 For anyone who has ever tried to grow something, I’m sure we have a few gardeners here today or watching over the internet, weeds are the one thing we always battle. My wife and I resurrected our garden this year as a way to keep busy. We cleared the  garden, put down landscaping paper, planted new stuff, and put down mulch. With all that preventative work, we still get weeds. They are just impossible to fully get rid of.

We hear today how another gardener, probably more like a farmer, is experiencing the same issue. Here though, the weeds present a much more serious issue. Jesus is trying to explain to his listeners what the Kingdom of Heaven is like. Our farmer is planting his crop of wheat. When no one was paying attention, someone came along and sowed a very different crop. From the original Hebrew and Greek translations, the weed was called bearded darnel. Darnel and wheat look the same as they grow. The only way one can tell the difference is when the plants are fully mature. The seed heads of darnel are a gray color, have a very bad taste, and are slightly poisonous. By the time the plants are mature enough to tell the difference, their roots are intertwined. This situation happened often enough that there was a criminal penalty in Roman Law for someone caught doing this.

Our other two parables have similar themes. The mustard seed, which is one of the smaller seeds, is planted in the ground and becomes a tree. The mature tree can be anywhere from 8-12 feet. A woman making bread takes yeast and puts it in a wheat mixture, maybe using wheat from the unfortunate farmer in the first parable, to make bread. The yeast was probably in a leftover piece of old bread that the woman mixed in with her new batch. Unseen by human eyes, the yeast does its thing. The mixture is transformed into a full loaf of bread.

So, what has Jesus revealed to us today about the Kingdom of God, and how can we live out these lessons today? I would like to explore three lessons that I believe are interrelated. There is quite a contrast between what the servants want to do with the field and what the farmer orders them to do. The servants want to rush out there and immediately remove the offending plants. Isn’t that such a human trait? The servants are the only ones not identified in this parable, but I think it is easy to see that they are us. We see something or someone we don’t like, or an idea we believe offensive, and what do we do? We immediately label it. We judge it, don’t we? We push it off into a corner or condemn it so we don’t have to see it, deal with it, or feel it’s influence.

That doesn’t seem to be what the farmer does though. He’s content with a little bit of messiness. There will be judgment eventually, but it isn’t going to be now and it isn’t going to be done by the servants. This is a warning or maybe a reminder to us not to reach beyond our human capabilities. Are there weeds in the world? Yes. Do we have to deal with them? Yes. What Jesus is telling us is that our human reaction to judge is premature. It fails to take into account the next two lessons.

The parables of the mustard seed and the yeast give us our last two lessons of the Kingdom of God. When the grower first plants the seed or the baker first puts the yeast into the dough, neither one of them witnesses what is happening. The seed is underground, and nothing appears above the surface. Appearances are deceiving though. A transformation is happening in the seed that will manifest itself above ground. The seed is becoming something else. From its small beginnings, it will become something much greater. It doesn’t do it all at once though. It takes time.

Time, patience, and transformation is the reason why the farmer doesn’t want the servants to go out and start pulling. The farmer knows the weeds are there. He isn’t ignoring them. Unlike weeds and wheat, we have the capability to change from one to another. I think a very interesting part of this parable is that one cannot tell whether the growing plant is going to be a weed or wheat under the end-when the seed pods appear.

Our first reading from Wisdom states that God shows his greatness when his power is disbelieved. The master of might judges with clemency and is lenient. He offers hope and forgiveness of sins. God doesn’t show his greatness when he is a merciless thundering judge ready to condemn. That is what the servants wanted to do. Ripping and tearing is not God’s way. He sees what we don’t see-the small seed of faith that is in each one of us. He knows what we don’t know- the potential that seed has to make the Kingdom of God more present in this world through our actions. He knows that like the yeast in that dough, his grace in us can be transformative if we work with him.

Like the underground seed though, it is difficult to see God working in someone’s life. We may not be able to see the transformation. What if our premature judging and its results stop or make it harder for God’s transforming work to progress. What if instead of acting like the servants, we are there to support, give a kind word, or encourage someone transforming from flat dough to yeast. What if we water that seed instead of digging it up and throwing it out?

I’m sure we all have real life examples of this faith growth and transformation in our lives. Maybe, this applies to us too. What if the servants had come along and harvested us before our time? Our work here as Christians is to water those seeds of faith, in ourselves and others, and to watch the transformation. There will be judgment. But, let’s leave that to the Farmer at the end of the age.