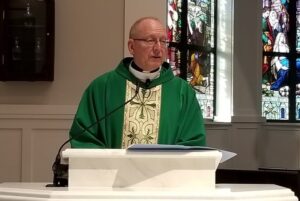 Every time we assemble here in worship, it is before a large crucifix.  That reminds us that human life always plays out under the shadow of the cross.  Until God’s Kingdom finally and fully comes, the human family will always know the pain of suffering and death.  We live in a fallen world, and hopes of “happily-ever-after” rub up against real struggles.  Life rarely goes as planned… sometimes for better and sometimes for worse.

Today’s gospel points out one particular source of pain for many people throughout history: divorce.  Many of us have experienced divorce firsthand—either within our own marriage or that of a loved one or a friend.  Too many preachers over the years have used these sacred passages to judge and condemn.  And so, it is important that we approach these scripture texts with great pastoral sensitivity and care for one another.

Note first that the Pharisees’ question to Jesus is not a pastoral question. It is a legal question, and the text says clearly that they were “testing him.” Marriage in first century Palestine was an arrangement between families and not a choice between individuals. It was more about an exchange of property (property = the woman) than it was about romance, mutuality, or personal fulfillment. In asking their question, the Pharisees are not concerned about a woman in an abusive or dangerous situation. They aren’t asking about a young couple who through illusion, immaturity, or naiveté made a mistake in choosing to marry. They are not envisioning a marriage that has become spiritually dead, not only devoid of, but rather destructive of, life. They are not worried about the spiritual or emotional well-being of the couple. Rather, their concern is clearly focused on Jesus. They have been plotting “how they might destroy him” (Mark 3:6) ever since he and his disciple broke the Jewish law by plucking grain and healing on the Sabbath in the early chapters of Mark’s gospel.

The Pharisees already know the answer to the question they are asking. “Moses allowed a man to write a certificate of dismissal and to divorce her,” they answer Jesus. In their culture, marriage and divorce were the prerogative of men. Women neither married nor divorced. They were the objects and sometimes the victims of marriage and divorce.  The Pharisees are not really concerned about marriage or divorce. They are more interested in Jesus’ answer because they are testing him. Will he follow the law of Moses, or reject it?

That is the context for today’s gospel. That is a reason to take seriously what Jesus says, and to be especially discerning in how we apply it, lest we become just like the Pharisees.  You see, Jesus neither accepts nor rejects the law of Moses. He reinterprets and deepens it. He says marriage and divorce are not about transactions… but about relationships, people, and God. He recognizes the law of Moses for what it is, a concession to “hardness of heart.”  Just as he did in the gospel reading last week, and the week before, Jesus is deepening and moving the conversation inward.  And so, the real issue in today’s gospel is not so much divorce as it is hard-heartedness.

Hard-heartedness lives in an economy of right and wrong, and its currency is self-justification, defensiveness, privilege, blame, name-calling, and finger-pointing.  Does that sound vaguely familiar as something we hear all around us these days? While the Pharisees ask, “Is it lawful for a husband to divorce his wife?” in the gospel, we could also ask, “Is it lawful for Republicans and Democrats to divorce each other?” or “Is it lawful for liberal Catholics and conservative Catholics to divorce one another?”  In other words, is it lawful for me to say of another, “I have no need of, or concern for, you?”  The questions may be different, but the test is the same.

The Pharisees want to talk about procedure; Jesus makes the conversation about substance. For the Pharisees, the issue is the state of the law; for Jesus, the issue is the state of one’s heart. Looked at this way, divorce is not limited to married persons. Divorce is an issue for everyone regardless of one’s marital status.  Divorce happens in all those relationships in which we or another have become hard-hearted. Hardness of heart is not simply a marital issue– it is a spiritual issue. It separates humanity from divinity. It divides husbands and wives, parent and child (born and unborn), brother and sister, Republican and Democrat, liberal and conservative, black and white, rich and poor, Christian and Muslim, citizens and immigrants, Palestinian and Israeli… the list is unending. Hard heartedness is not simply about having differences. It’s about having no need of the other.

Divorce is a symptom of “spiritual heart disease”. Wherever there is division and separation there is hardness of heart, our own or another’s. It is the reason the disciples tried to keep the children from Jesus. It is the reason the Pharisees could even ask their question to test Jesus. Before divorce ever happens between us, it happens within us. We begin to live isolated, closed, and fragmented lives. We become fearful, defensive, and lonely.

We can all give reasons for our many divorces. We can describe the fights, pain, fear, abuse, incompatibility, and the differences of opinions, values, and dreams. We can name the failures and disappointments. We can recall what she said… or what he did. These are all real, but they only justify the legality of our divorce. The reasons, however, leave us stuck. They offer neither life nor healing– only survival. God offers and desires more for us than mere survival. The life and healing we desire is found in living with a soft heart, not a hard heart. That’s a vulnerable and risky place to live, and it’s the place and way in which Jesus lived.

As we begin to examine and soften our hearts, we discover that we have become “one flesh” with God. God has joined us to himself, and no one can separate what God has joined together. When this happens, there is no divorce that can separate us from the love, life, and presence of God… and divine grace fills all our relationships. When this happens: (1) it deepens our gratitude and joy in the relationships that are most intimate and life-giving; (2) it gives us courage and perseverance to work on the ones that are broken; and (3) it offers us wisdom and strength when it is necessary to find a holy life separate from another person. In each of these different relationships, Christ opens his arms to us and invites us to receive his blessing and his love.

The real challenge of today’s gospel is the work of examining our own heart– to name the places of hardness– to become more open and vulnerable– and to be willing to change and be changed.  When we regain our soft hearts, we become like the children Jesus embraces at the end of the gospel passage.  These children are representative of the new beginnings, new life, and new possibilities that are possible when we shed our hardness of heart—and, as Jesus clearly points out, “the Kingdom of God belongs to such as these.”